How does Alabama rank for percentage of homes receiving food stamps?

Alabama ranks 49th out of 50 states for lowest percentage of households receiving food stamps at 2.9%. The study is based on a total of 1,856,695 Alabamian households who reported whether or not food stamps were received.

How many Alabama households received food stamps in the past year?

52,953 households in Alabama received food stamps within the last year. 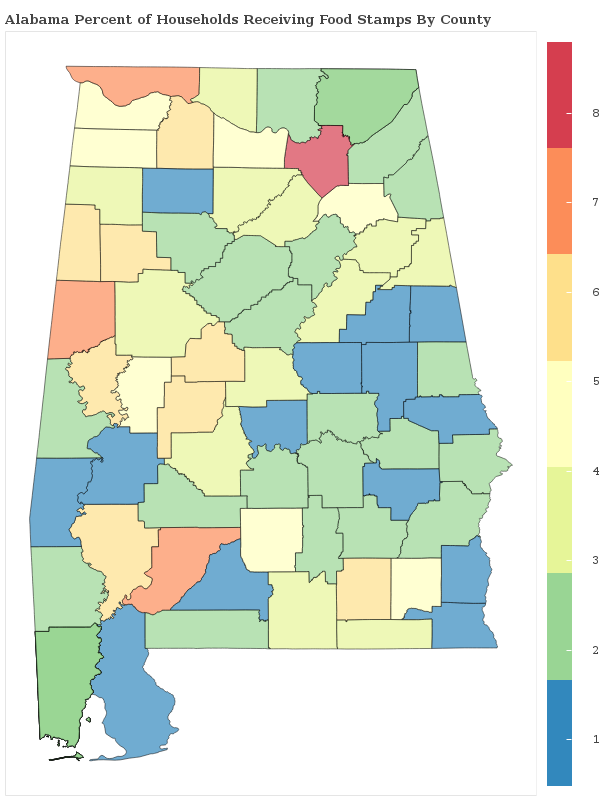 The percentage of households receiving food stamps in Alabama varies by county.

How do I apply for food stamps in Alabama?

There are 5 government food-related benefits that you may apply for as a resident of Alabama.

The Summer Food Service program provides free, nutritious meals and snacks to help Alabama children in low-income areas get the nutrition they need to learn, play, and grow, throughout the summer months when they are out of school....

The Alabama Special Milk Program provides milk to children in schools, childcare institutions, and eligible camps that do not participate in other Federal child nutrition meal service programs. Schools that participate in the National School Lunch or...

The Women, Infants, and Children (WIC) Program provides supplemental foods, nutrition education and referrals to health care, at no cost, to low-income pregnant, breastfeeding and postpartum women, infants, and children up to age five who are determi...

How does the percentage of homes receiving food stamps compare across the largest cities in Alabama?

Which areas have the highest rate of poverty in Alabama? We breakdown the poverty rate by city and county across Alabama and rank communities with the highest and lowest concentrations of residents living below the poverty line.

How are the Social Security Payments distributed throughout Alabama? We breakdown social security benefits by city and county statewide and rank communities with the most and least social security income per capita.

The poverty line for Alabama in 2018 is based on the federal guidelines, which begins at $12,140 for a single person, adding $4,320 for each additional person.